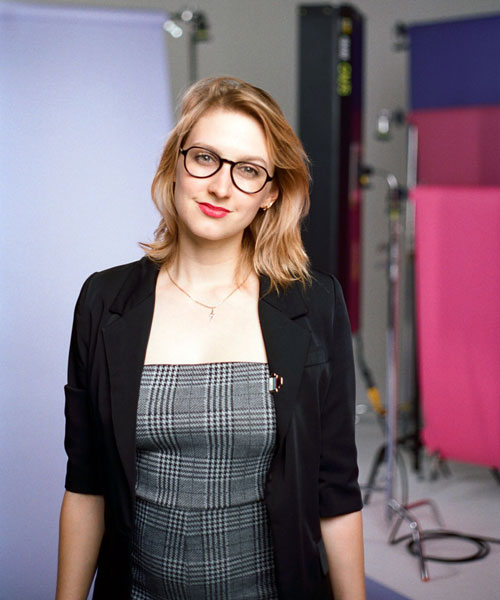 Emily Geraghty will be inducted into the 2019 Missouri Public Affairs Hall of Fame.

Emily Geraghty is an accomplished multimedia journalist and producer. She uses a variety of mediums to tell stories that increase the visibility of women and marginalized groups.

Growing up in St. Louis, she spent hours behind the camera. This interest in visual media continued to grow as she learned the skills of the craft. During her years at Missouri State University, she studied media production and earned an internship in New York City with Logo, Viacom’s LGBT channel.

This connection to Viacom helped her land her first post-graduation job at MTV. While at MTV, she started an inclusive fashion blog that gained traction online with an audience of 72,000 visitors a month.

She began taking on side jobs as a video editor, which led to a full-time job editing web series for a production company.

It was during this time that she started noticing the inequity in the business – including the lack of gender diversity in video production staff and in executive positions.

Inspired to see that change, she began honing her technical skills behind the camera and continued making the inclusive content she wanted to see, which led to a job as a producer for Bustle and later a senior producer for Conde Nast. At Conde Nast she produced, directed and edited video for their women's brands including Glamour, Allure, Teen Vogue and Iris.

She developed a creative voice and eventually became a freelance video producer, journalist and photographer.

She created and directs the size-inclusive sensation, “Women Sizes 0 to 28 in the Same Outfit.” This Glamour series boasts 1 million YouTube views per episode. She was also awarded a Webby Award for her mini-documentary “Pretty Big Movement Destroys Dancer Stereotypes” from the International Academy of Digital Arts and Sciences.

Geraghty’s upcoming projects include a short documentary for NBC about stroke survivors that she filmed in St. Louis and a photojournalism project focusing on women activists at the Mexican border.

Her work amplifies voices of underrepresented people and exemplifies the values of cultural competency.