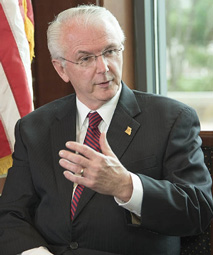 Bob Holden will be inducted into the 2021 Missouri Public Affairs Hall of Fame.

A lifelong public servant, Bob Holden has left his mark on the state of Missouri with support for numerous areas that include education, international relations and sustainable practices.

Holden served as Missouri’s 53rd governor from 2001-2005. Prior to his election, he served two terms as the Missouri state treasurer and three terms as a Missouri state representative.

He is the Missouri co-chair for the U.S. Global Leadership Coalition and an executive board member of the Missouri State NAACP Chapter. After leaving the governor’s office in 2005, he founded the Holden Public Policy Forum and was a professor at Webster University for 10 years. While at Webster, he helped bring the first Confucius Institute to the university.

Currently the chairman and CEO of the United States Heartland China Association, Holden led efforts to bring the first delegations of Chinese students to be participants in the American Legion Missouri Boys and Girls State Program.

During Holden’s time as governor, he contributed to several initiatives: