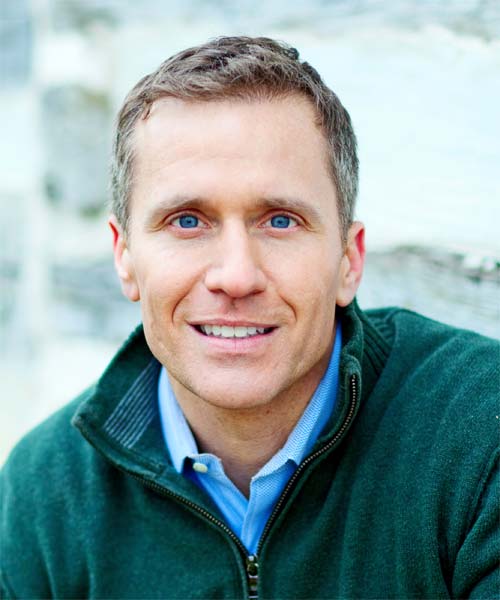 Eric Greitens was inducted into the 2015 Missouri Public Affairs Hall of Fame.

Eric Greitens was born and raised in Missouri, where he was educated in public schools. He was an Angier B. Duke Scholar at Duke University, where he studied ethics, philosophy and public policy. Selected as a Rhodes and a Truman Scholar, he attended the University of Oxford where he earned a master’s degree and his doctorate.

Greitens served as a United States Navy SEAL officer and deployed four times to Afghanistan, Southeast Asia, the Horn of Africa and Iraq. In 2005, he was appointed by the president to serve as a White House Fellow and in 2011 the Association of the United States Navy named him the Navy Reserve Junior Line Officer of the Year. His military awards include the Combat Action Ribbon, the Purple Heart and the Bronze Star.

After returning from Iraq, Eric donated his combat pay to found The Mission Continues, a national nonprofit organization that challenges veterans to serve in communities across America. In 2013, TIME magazine named him to their list of the 100 most influential people in the world, and most recently Fortune magazine recognized him as one of the 50 greatest leaders in the world. A photographer and writer, Greitens is the author of three books and teaches as a senior fellow at the Truman School of Public Affairs.