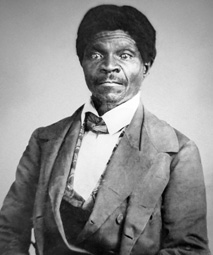 Dred Scott will be inducted into the 2020 Missouri Public Affairs Hall of Fame.

Dred Scott was a civil rights pioneer. He was born a slave around 1799-1805 in Southampton, Virginia. Over the years, two different families owned Scott and he moved with them to Missouri and other places where slavery was prohibited, such as Illinois, the Wisconsin Territory and Fort Snelling, which later became Minnesota. In 1846, under the law “once free, always free” by which they claimed their freedom, Scott and his wife, Harriet, made history by suing for their and their children’s freedom at the Old Courthouse in St. Louis, Missouri.

After years of appeals and court reversals, the case, known as Dred Scott vs. John F. Sandford made it to the U.S. Supreme Court. On March 6, 1857, Chief Justice Roger Taney gave the Dred Scott decision. It said the Scotts were not citizens, neither were any slaves; therefore they had no rights to be respected. The court further ruled the Missouri Compromise and Northwest Ordinance unconstitutional, allowing slavery in all states and all territories. This case served as a major catalyst for the American Civil War.

After the Civil War ended, the 13th, 14th and 15th Amendments to the Constitution (also known as the Dred Scott Amendments) ended legalized slavery, ensured citizenship to former slaves and their children, and restored voting rights to African Americans.

The Scott family endured five trial proceedings over 11 years to an unfortunate end. The case is infamous, stated to be the worst decision ever rendered by the U.S. Supreme Court. A son of their former owner eventually freed the family and Scott lived a free man until his death on Constitution Day, Sept. 17, 1858. His legacy lives on in the fight for equality and justice through the Dred Scott Heritage Foundation.