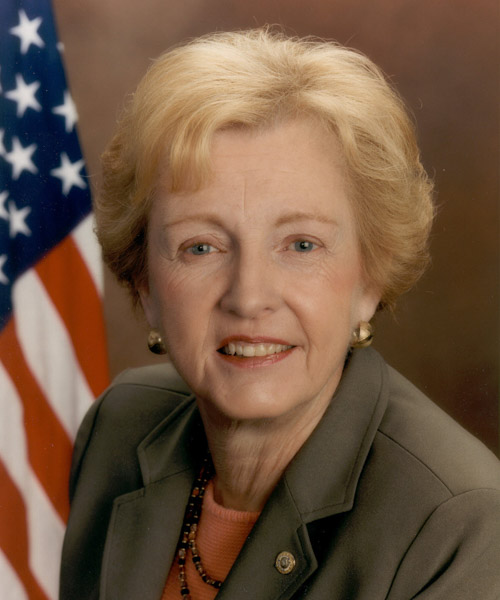 Jean Carnahan will be inducted into the 2018 Missouri Public Affairs Hall of Fame.

Jean Carnahan grew up in a working class neighborhood in Washington, D.C., where her father was a plumber and her mother a hairdresser. Determined to get a college education, Carnahan worked while attending George Washington University.

In 1955, she earned a degree in business and public administration, making her the first in her family to graduate from high school and college. In 1954, she married Mel Carnahan. The couple raised four children on a farm near Rolla where she worked in political, civic, church and scouting activities.

Jean and Mel worked side by side during his 40 years of public service. When he became governor of Missouri in 1992, Jean took on the role of Missouri's first lady. From 1993 to 2000, she worked to improve the lives of Missouri's children. She was an advocate for on-site day care centers for working families, for childhood immunization, and for abuse centers, the arts, and Habitat for Humanity.

In 2000, Gov. Carnahan was campaigning for the U.S. Senate when he, their oldest son Randy, and his campaign adviser were killed in an airplane crash just three weeks before the election. On election day, Missouri voters elected Gov. Carnahan posthumously. When Jean agreed to take her husband's place in Washington, the appointment made her the first woman in Missouri history to serve in the U.S. Senate.

During her two years in Washington, Carnahan was a leading advocate for working families. She served on the Commerce, Governmental Affairs, Aging and Small Business committees. She was the fifth woman to ever serve on the Armed Services Committee.

Sen. Carnahan was a member of the first Congressional delegation to Afghanistan after 9-11 and conferred with heads of state in Turkey, Uzbekistan, Tajikistan, Pakistan, Afghanistan and Oman.

Since leaving the Senate, Carnahan resides in St. Louis, where she is a writer, speaker and political activist.