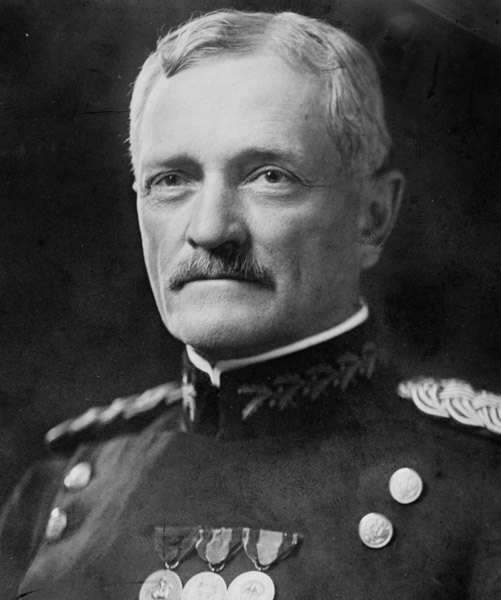 General John J. Pershing will be inducted into the 2018 Missouri Public Affairs Hall of Fame.

General John J. Pershing led a distinguished military career, which culminated in the United States creating a new title: General of the Armies.

He is most recognized for his contributions during the first World War, where he served as the commander of the American Expeditionary Force (AEF) on the Western Front. But he first reported for duty in 1886, fresh out of West Point, where his commanding officers commended him for his marksmanship and leadership.

Pershing was born on a Laclede, Missouri, farm, attending school in Laclede and later Truman State University. He began teaching, then furthered his education at West Point, where he later became an instructor. He also taught military science at the University of Nebraska while pursuing his law degree.

Early in his career, Pershing established a reputation for bravery and stern discipline. He commanded regiments in battles of the Indian Wars, the Spanish–American War and led efforts as a major of the United States Volunteers during the Philippine–American War.

President Woodrow Wilson selected Pershing as the commanding officer of the AEF when the United States entered World War I. Largely, American successes were credited to Pershing's great leadership and willingness to focus solely on the military mission rather than the governmental policy discussions going on behind the lines.

He became the most celebrated American leader of the war and mentored many great military leaders of World War II, including George Marshall, Dwight Eisenhower, George Patton and Douglas MacArthur.

He served as the chief of staff of the U.S. Army until 1924, when he retired from active duty. He published his memoir, which won a Pulitzer Prize.

Pershing remained active in the veteran community until his death in 1948.