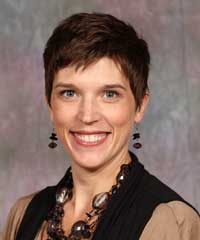 Dr. Shannon Wooden is a gender studies expert and professor of English. She specializes in British literature and teaches a wide variety of courses, from the Romantic/Victorian/20th century survey, to Critical Approaches to Literature, to upper-level courses in 18th and 19th century literature, as well as Introduction to Literature and Creative Writing: Fiction.

From her dissertation work on Darwinian evolution and race science in Victorian novels, much of her research has had to do with literature and science. After teaching in social medicine departments and participating in a narrative medicine workshop at Columbia University, she has further focused on the intersections between literature and medicine. Two recent articles deal with narrative medicine readings of Dostoevsky’s “A Gentle Creature” and Mark Haddon’s "The Curious Incident of the Dog in the Nighttime," respectively focusing on empathic reading as a worthy goal for literary pedagogy, and, through medical paradigms, one performable with critical rigor.

She has also published on Victorian women’s sensation fiction, the 1990s film adaptations of several Jane Austen novels, Romantic and Victorian abolitionist poetry and representations of gender in the Pixar movies; her most recent book project, with co-author Ken Gillam, analyzes postfeminist boy culture as represented by Disney-Pixar.

Gender studies expert Dr. Shannon Wooden shares the importance of focusing on the messages within films that are often overlooked.