Will Allen, farmer, founder and CEO of Growing Power Inc., is recognized as a preeminent practitioner of urban agriculture in America and throughout the world.

Will grew up on a small farm in Maryland, the second-youngest of six children of a sharecropper. Despite a strict rule of his father’s – no sports until all farm chores were done – he became a standout basketball player in high school and the first African-American scholarship athlete at the University of Miami. He eventually became the basketball team captain, and still holds a number of Miami Hurricanes records. Will graduated with a degree in education.

While living in Belgium, Will reconnected with his farming roots. He observed the intensive methods used on small plots by local farmers, and began applying those methods in a garden where he grew food for his family and teammates. 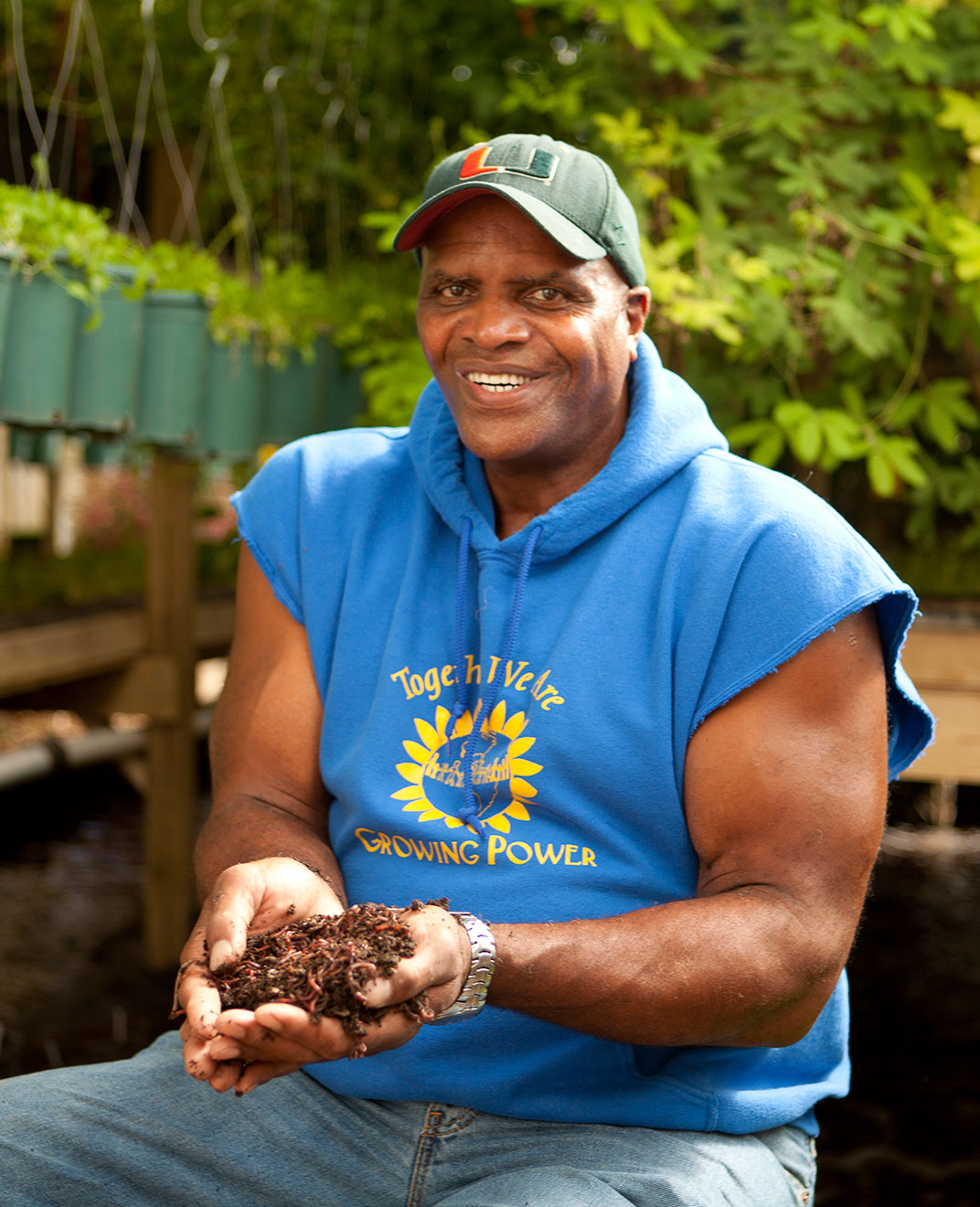 Upon returning to the United States, Will began a career in corporate sales and marketing. Job opportunities brought him to Oak Creek, a suburb of Milwaukee, his wife’s hometown and site of her family farm.

Eventually, Will tired of corporate life and took over operation of the farm. In 1993, wanting a place to sell his produce, he located a vacant garden center with three-acres on Milwaukee’s north side.

As it turned out, the small property was the last tract in the city of Milwaukee still zoned for agriculture. Will realized he could not only sell food from his own farm in Oak Creek, he could grow food on-site in a neighborhood where there was little fresh food to be found.

The ultimate direction of Will’s life truly changed when young people from the neighborhood, including kids who lived in the largest low-income public housing project in Milwaukee, began to ask him for advice and assistance with growing their own vegetables. Almost overnight, Will took up the mantle of teacher and trainer, and the impromptu gathering of neighborhood children became the Youth Corps, a program that continues today. In 1995, Growing Power Inc. was born: a not-for-profit center for urban agriculture training and building community food security systems.

Will has been an innovator in methods of composting, vermicomposting (using worms to refine and fertilize compost) and aquaponics (growing fish and food plants in a closed system). These and other intensive practices result in remarkable yields of food, even in a very small area.

Today, Growing Power is involved in more than 70 projects and outreach programs in Milwaukee, across the United States and throughout the world. Will has trained and taught in the Ukraine, Macedonia and Kenya, and has plans in place to create community food centers in South Africa, Zimbabwe and Haiti. In the U.S., Growing Power has set up multiple Regional Outreach Training Centers throughout the U.S.

In 2008, Will was awarded the John D. and Katherine T. McArthur Foundation “Genius Grant” and named a McArthur Fellow – only the second farmer ever to be so honored.

Will is also a member of the Clinton Global Initiative. On Feb. 9, 2010, was one of four national spokesmen who stood on the dais with First Lady Michelle Obama at the White House to launch her “Let’s Move!” initiative to reverse the epidemic of childhood obesity by 2015. In May 2010, Time magazine named Will as one of 100 World’s Most Influential People.

Despite his busy schedule as an international ambassador for urban agriculture and universal food security, Will continues to farm his own property in Oak Creek and direct operations at Growing Power, still headquartered in the original location on Silver Spring Drive in Milwaukee.