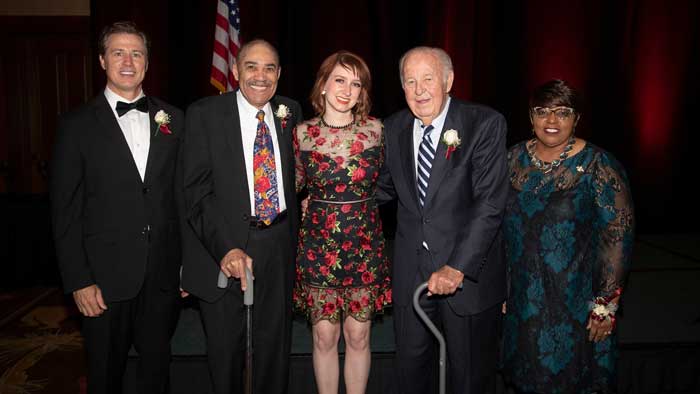 The first inductee into the Missouri Public Affairs Hall of Fame was Maya Angelou.

Maya Angelou was accomplished in many ways. She was an author, poet, historian, songwriter, playwright, dancer, stage and screen producer, director, performer, singer and civil rights activist. As a civil rights activist, Angelou worked for Dr. Martin Luther King Jr. and Malcolm X.  She wrote six autobiographies, most notably “I Know Why the Caged Bird Sings.” In 2013 she was the recipient of the Literarian Award, an honorary National Book Award for contributions to the literary community.

The second inductee into the Missouri Public Affairs Hall of Fame was Bill Clay Sr.

For decades, he took care of needs that demanded to be met. He fought for workers’ benefits, education, poverty and civil rights. Being the first black representative from Missouri, he served in the U.S. House of Representatives from 1969-2001. His tenure was longer than any other former black member of the house. Clay was one of 13 founding members of the Congressional Black Caucus. Clay retired at the end of the 106th Congress (1999-2001). His district elected his son, William Lacy Clay Jr., to that seat.

The third inductee into the Missouri Public Affairs Hall of Fame was Bill Darr.

A successful agribusiness entrepreneur, Bill Darr founded American Dehydrated Foods and International Dehydrated Foods. He has been recognized as a humanitarian, philanthropist, child advocate and higher education champion. He and his wife, Virginia, whom he married in 1988 40 years after they first met, dedicate their lives to making the communities they are a part of better. They established the Darr Family Foundation in 2002 to continue Darr’s commitment of supporting people in need.

The fourth inductee into the Missouri Public Affairs Hall of Fame was Emily Geraghty.

Emily Geraghty tells real stories about people who don't often see themselves reflected in the media. People whose voices have been stifled. She's an accomplished multimedia journalist and filmmaker who shares compelling stories that challenge and expand viewers’ world views. She created and directs the size-inclusive sensation, “Women Sizes 0 to 28 in the Same Outfit.” This Glamour series boasts 1 million YouTube views per episode.

The fifth inductee into the Missouri Public Affairs Hall of Fame was Doug Pitt.

A little over a decade ago, Doug Pitt read sobering statistics on poverty in southwest Missouri. In 2007, the philanthropist founded Care to Learn, a Springfield-based nonprofit that provides immediate funding to meet children’s emergent needs. The Springfield native also joined community task forces such as the Homeless Task Force and Ready To Learn child project.  He’s also a bicyclist who has used that passion to raise funds for people in the U.S. and overseas.